Cut in half with axe by Fuminori

Ryoko Tanbo(丹保 凉子 Tanbo Ryōko) is the physician in charge of Fuminori Sakisaka's condition and one of the top neurosurgeons at T University Medical Center.

She is voiced by Mitsuki Saiga (credited as Makoto Sato).

Ryoko, prior to the events and past of Saya no Uta, was according to her a law-abiding citizen who was said to never have even gotten a ticket.

After Masahiko Ogai's experiments with Saya, an alien from another dimension, aroused suspicion at the medical center he and Ryoko both worked at due to Saya's behavior, she and the rest of the hospital staff (with the aid of the police) had to wipe any evidence of Ogai and Saya from the hospital after he escaped. However, this did not satisfy Ryoko's curiosity as to what these experiments really were, and her exposure to the grotesque results that she had to exterminate (mutated rats and Saya's fluids, among other things) horrified her enough to become obsessed as to finding out what happened. She eventually found Ogai as well as the people who had encouraged his experiments, and what he had really been doing. Ryoko's discovery gave her life-long trauma, warped her personality, and caused her to become paranoid and obsessive over killing Saya. She began to sleep with weapons hidden in her room and drink profusely.

She later becomes the psychiatrist and physician in charge of Fuminori Sakisaka, who refuses to speak to her or give her any information on his condition. Later, Koji Tonoh and Yoh Tsukuba come to speak with her, and they exchange cell phone numbers after discussing his condition. In both instances, she's interrogated, mostly about Professor Ogai, who Fuminori states he is searching for. She gives vague information (and lies in Fuminori's case) to them both due to her confusion as to why Fuminori would know about Ogai and her worry about the consequences of revealing that information. She decides to investigate further after Koji speaks with her about this and the possibility that Fuminori may be involved with the disappearance of Omi Takahata.

Eventually, after Koji leaves her a message while at Ogai's cabin with Fuminori and doesn't respond after she calls back, she goes to him there, rescuing him from the well Fuminori pushed him into in an attempt to kill him. The both of them explore the hidden "lab" of Ogai through a secret passage in the well, and she brings him and Ogai's papers back with her to the cabin, where she further explains what she knows about Fuminori but still not revealing all she knows to Koji. After Koji leaves in order to try and confront Fuminori, she tosses him a gun in order to use in the inevitable fight.

Depending on the choice the player made for Koji Tonoh after he discovered the body parts of Omi Takahata in Fuminori's refrigerator, he can make a phone call to two people: Fuminori or Ryoko Tanbo. This choice will dictate which two endings the player gets.

In this ending, Koji calls Ryoko, revealing his findings. By this time, she has studied Saya from the papers she had found in Ogai's lab, and tells him what they were dealing with "would not go down easily." She tells him not to do anything until she returns with enough findings to know how to stop Saya, and they meet up at a diner to discuss their plan as to how to eliminate Fuminori Sakisaka.

Ryoko reveals her past to him, about her discovery of Ogai's experiments and her warped perspective of the world caused by it. Despite Koji believing her to be delusional, he decides to trust her, and she goes with him in the trunk of his car to the spot Fuminori told him to arrive at.

After Koji kills the mutated Yoh sent after him by Fuminori and Saya, Fuminori and him fight until Saya attempts to ambush Koji and kill him. Ryoko shoots Saya, allowing Koji to get away, and tosses him a thermos filled with liquid nitrogen to pour onto Saya. Fuminori, blinded with rage, kills Ryoko with an axe due to her shotgun malfunctioning, but before she dies, she delivers a final, killing shot to Saya with her shotgun with a twisted maniacal grin.

In this ending, Koji calls Fuminori and goes alone, causing Saya's ambush to work and kill him. Saya's body "blooms" in order to infect the world and begin the process of changing all living creatures on earth into her species.

In the epilogue, Ryoko finishes compiling the findings of Ogai and reads it to herself as she watches the world end. She finds herself calm and serene at this, and upon learning what Saya truly is, she feels a longing to meet her and attend the “wedding-to-end-all-weddings” that accompanies the transformation-apocalypse- along with the hope that she’ll still be able to drink when all is said and done, of course.

Ryoko presents herself on the job as a kind, mild-mannered, polite doctor, albeit somewhat reserved and unsympathetic. Even at her most polite, she gives off an unmistakable air of aloofness to her patients and acquaintances.

Beneath her normal exterior, she is a cold and callous woman tormented by nightmares of Saya, the foster “child” of Masahiko Ogai, and the results of their experiments. She is an insomniac who only sleeps one out of three nights with a sawed-off shotgun in her closet (previously a nata or naginata) and an alcoholic who drinks 190-proof vodka. Ryouko shows little sympathy for others and even herself, and rather a calculated and unemotional approach to getting things done. She shows almost no grief discussing death or loss, and considers the possibility of it happening to her or others of little concern, as well as discussing her own death or suicide with disregard.

She appears to bear a immense amount of self hatred, due to her past insistence on chasing Ogai down that ended up resulting in her lifelong trauma. Her one driving motive to keep going is to get rid of Saya and all traces of her and Ogai’s effect on the planet, to the point of obsession and, most likely, insanity.

Ryoko has no supernatural powers, but she has proficient knowledge in the medical and psychiatry field due to her profession of being a neurosurgeon and physician. She also shows a surprising amount of survival skills and intel, as well as apparent knowledge on how to deal with the supernatural.

Ryoko is a woman with light aqua hair. She wears glasses, with dark brown or black irises behind them. She usually wears a coat, whether it's a white lab coat or a leather jacket. 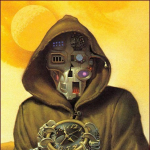